Wind power through the use of wind turbines has become one of the most popular ways for our partners to get involved in the clean energy transition.

What is wind energy?

Wind energy, or wind power, refers to creating electricity using the wind or air flows that occur naturally around us. Modern wind turbines are used to capture kinetic energy from the wind and generate electricity.

There are three main types of wind energy: 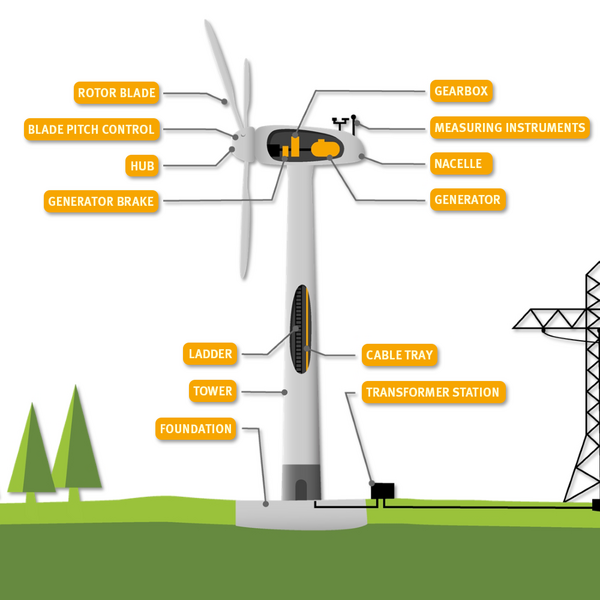 The most important parts of a wind turbine with a horizontal rotation axis are the rotor, tower, foundation and nacelle.

The recognizable shape is made of a tubular steel tower that supports a hub with three attached blades. This hub, called a “nacelle,” houses the gearbox, generator, and controls. When wind measurements are collected, the turbine is directed to rotate and face the strongest wind, and change the angle or "pitch" of its blades to optimize energy capture.

A typical modern turbine will start to generate electricity when wind speeds reach six to nine miles per hour, or what we like to call the cut-in speed. Turbines will shut down if the wind is blowing too hard, roughly 55 miles per hour, to prevent equipment damage.

Over the course of a year, modern turbines can generate usable electricity more than 90 percent of the time. This is because a wind turbine will start generating electricity once the wind around it reaches cut-in speed and will increase its energy production as the wind speed around it increases.

UKA is committed to honesty and quality through every step of the renewable energy development process.
Contact us today to learn more about becoming a UKA partner.